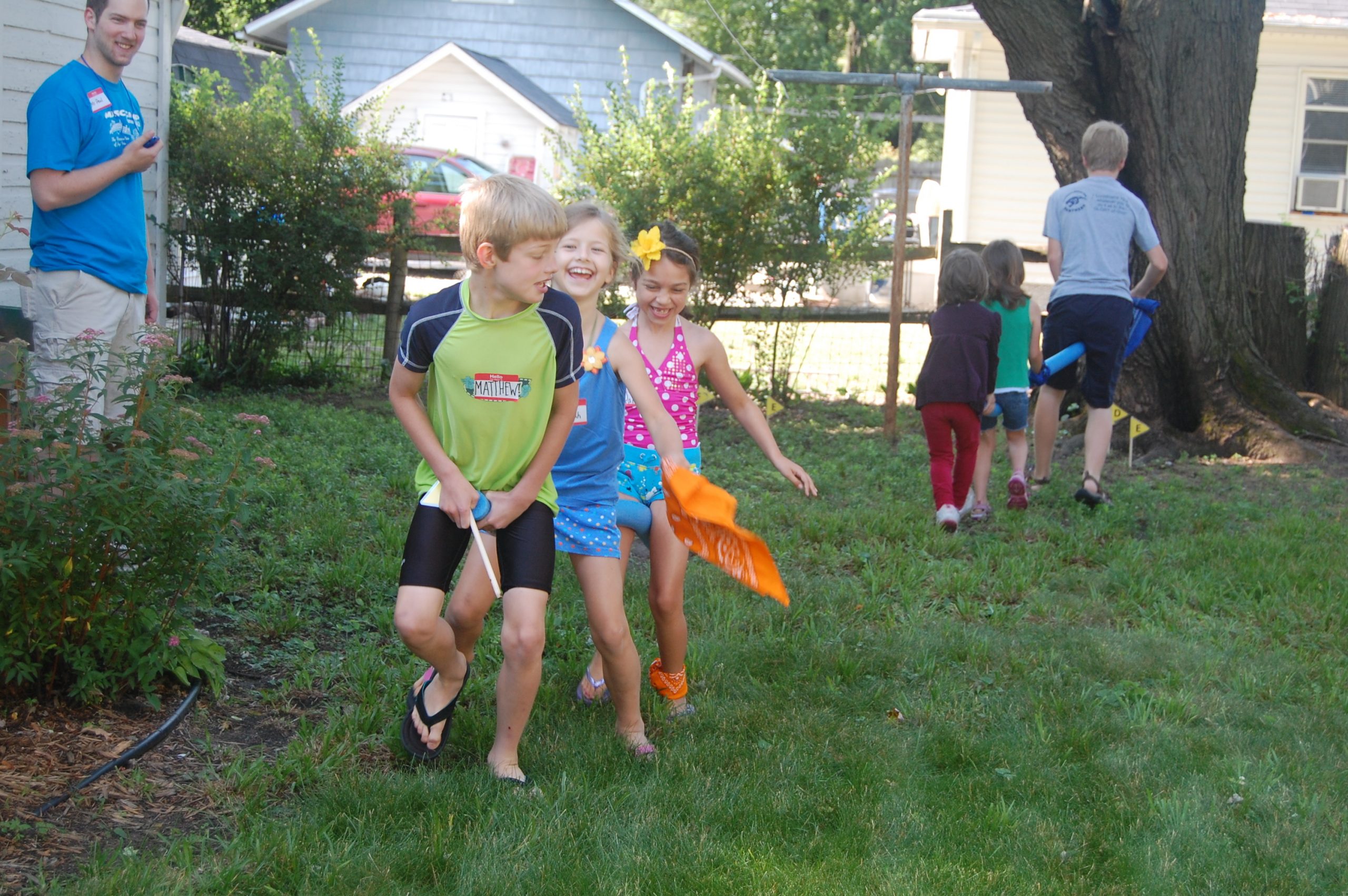 We had great weather on Day 2 of our camp last week! Our first game of the day was Sheryl Welles’ fabulous Musical Alphabet Noodle Relay!  For this relay, team members must travel via the noodle to retrieve alphabet flags from the ground and bring them back to the starting point.  For the first round, they had to retrieve the flags in order A-G, and the second round they retrieved them backwards.  Watching them travel via the noodle was pretty hilarious, I must admit!  My students loved this game. Our next game was another of Sheryl’s great ideas: the Musical Alphabet Ball Toss.  This game again practiced the musical alphabet forwards and backwards.  The goal is for teams to get 7 balls — each labeled with one of the letters of the musical alphabet — within the hula hoop.  See Sheryl’s post for more details. This game was inspired by Ana Smith’s “Water Balloon Staff” game.  I adapted the game for the keyboard because some of my beginner students are only just learning staff notation.  So, I called my version the “Water Balloon Keyboard Toss.”  I drew a large keyboard on the cement with sidewalk chalk, and asked all but one of the students to stand on a white key.  The other student spun a spinner that had the letters A through G, and then had to toss a water balloon onto the piano key that corresponds to the letter they spun.  If the water balloon landed on the piano key, they earned a point for their team.  After each toss, the students shifted down the keyboard and the next player came up to spin.  The students loved getting splashed by the water balloons as they landed! Next, we played Rhythm Ring Toss.  This game was inspired by Sheryl Welles’ ring toss game — but I modified it so that instead of building measures, teams worked together to get the right number of rings on each flag according to the number of beats each note/rest was worth.  For example, the whole note should get four rings around it.  I timed each team to see which team completed the ring toss in the shortest time.

You need to have lots of rings for this game.  I was not easy to find where to buy the rings at a reasonable cost, so I ended up using the rings from my Twister Hopscotch game which actually worked remarkable well!  I made the flags myself (on the backs are the letters A-G, used in the relay game mentioned earlier). This game was also inspired by one of Sheryl Welles’ ideas.  I put A-G labels on pop cans and put them on sawhorses for each team.  I held up a flashcard of a keyboard with a star on one of the piano keys, the team members competed to be first to knock down the corresponding letter using the pool water shooter.  This water game was so fun!

We had a fun second day of camp!