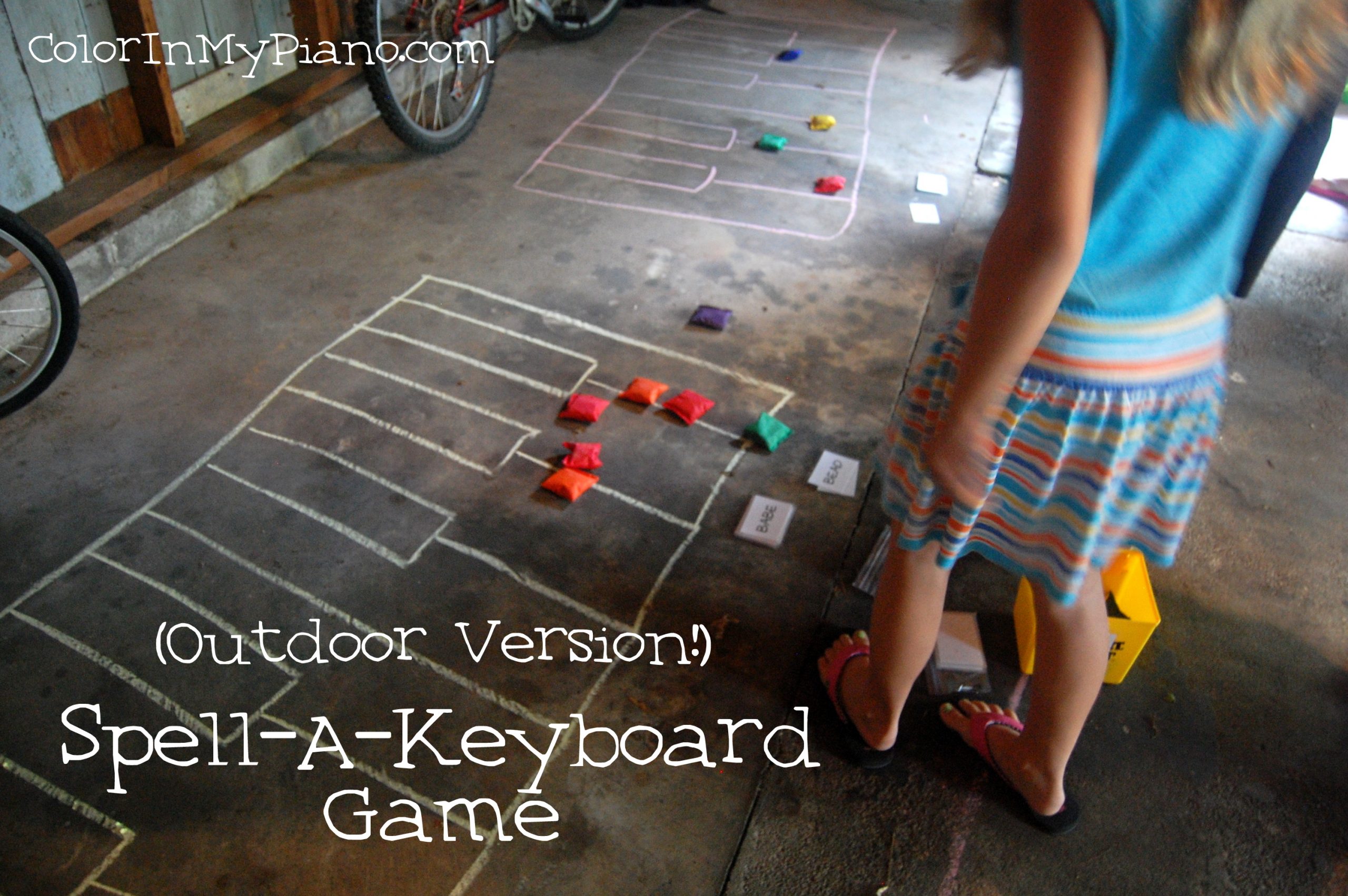 Last week, I held a Musical Olympics camp for my students and it was a great success!  We had such a fun week and I received a lot of positive feedback from the students and parents.  I will definitely continue doing similar camps in future years!

Over the course of this week, I’m going to be sharing lots of details and photos.  At the end of the week, I’ll share a pdf download with more details about the materials and directions for the games.  🙂

Here’s some of the details:

For Day 1 of camp, my wonderful friend Loretta (who lives a couple of hours away) came for a visit to be my camp helper!  It was great seeing her again. First, we played an ice-breaker game.  This game is inspired by the old game “Who Am I?” game where players put a peice of paper on their forehead that has the name of a famous person written on it.  Then players take turns asking yes-or-no questions in order to deduce what name is on their forehead.  My version of this game is called, “What Note Am I?”  I created adjustable headbands using poster-board and then pasted a note or rest on each headband.  Students mingled to ask each other questions like: “Do I have a stem?”  “Is my note head filled in?”  “Am I a rest?”  “Am I worth two beats?” etc….until they figured out which note/rest was on their headband. Next, we organized the 8 students into two teams.  I gave each team a blank flag (created from white cotton fabric and 24-inch dowel rods) and some Crayola fabric markers, so they could decorate their flags with their team name. Our first team game was an outdoor version of the Spell-A-Keyboard game!   I drew two giant keyboards on the garage floor with sidewalk chalk.  Each team was given a pile of beanbags and a set of Musical Alphabet Word Cards.  Teams raced to see how many words they could spell within 4 minutes.  Each team member was allowed to toss one beanbag, and then they went to the back of the line.  For the first round, we used cards with three-letter words, and the second round we switched to cards with four-letter words.  Points were awarded for each of the words the teams spelled. Next, we played Sheryl Welles’ “Note ID Relay” game.  This relay is a great way to review the names and values of the notes and rests.  Team members complete the relay by diving through a hula hoop, bouncing a ball to the chalk, drawing a note value and shouting its value, and then jump-roping back.  See Sheryl’s post for more details. Next, we played Rhythm Beanbag Toss.  For this game, I lined up all the students so that every-other student was a member from each team.  Students took turns tossing a beanbag to try to earn points for their team.  Points were earned according to the number of beats the note/rest on the bucket is worth — but only if the player calls out the correct number of beats that note/rest is worth.  This game was fun to watch!  Some students strategized to aim for the highest rhythm values to get the most points, even though those buckets were the furthest away.  Other students chose the nearer buckets because there was a greater chance of making it.  🙂 Our last game of the day was the Build-A-Measure Beanbag Toss.  I found the playhouse/beanbag toss thingy pictured above at a thrift store for a few dollars.  I taped various note/rest values on the little doors and the basketball hoop at the top, and then assigned the quarter note value to the large opening in the top.  The students lined up so that every-other person was from each team.  Using the beanbags, team members worked together to build 4/4 measures.  Loretta and I wrote down the notes/rests as each team earned them so they could keep track of how many beats they had left in the measure they were working on.  If teams overfilled a measure by accident, they had to start over.  Another rule was that every measure had to be different.  Teams earned a point for each measure they successfully built.

We had a really great first day of camp, despite the fact that the rain forced us to stay in the garage!  Stay tuned for the Day 1 details tomorrow.