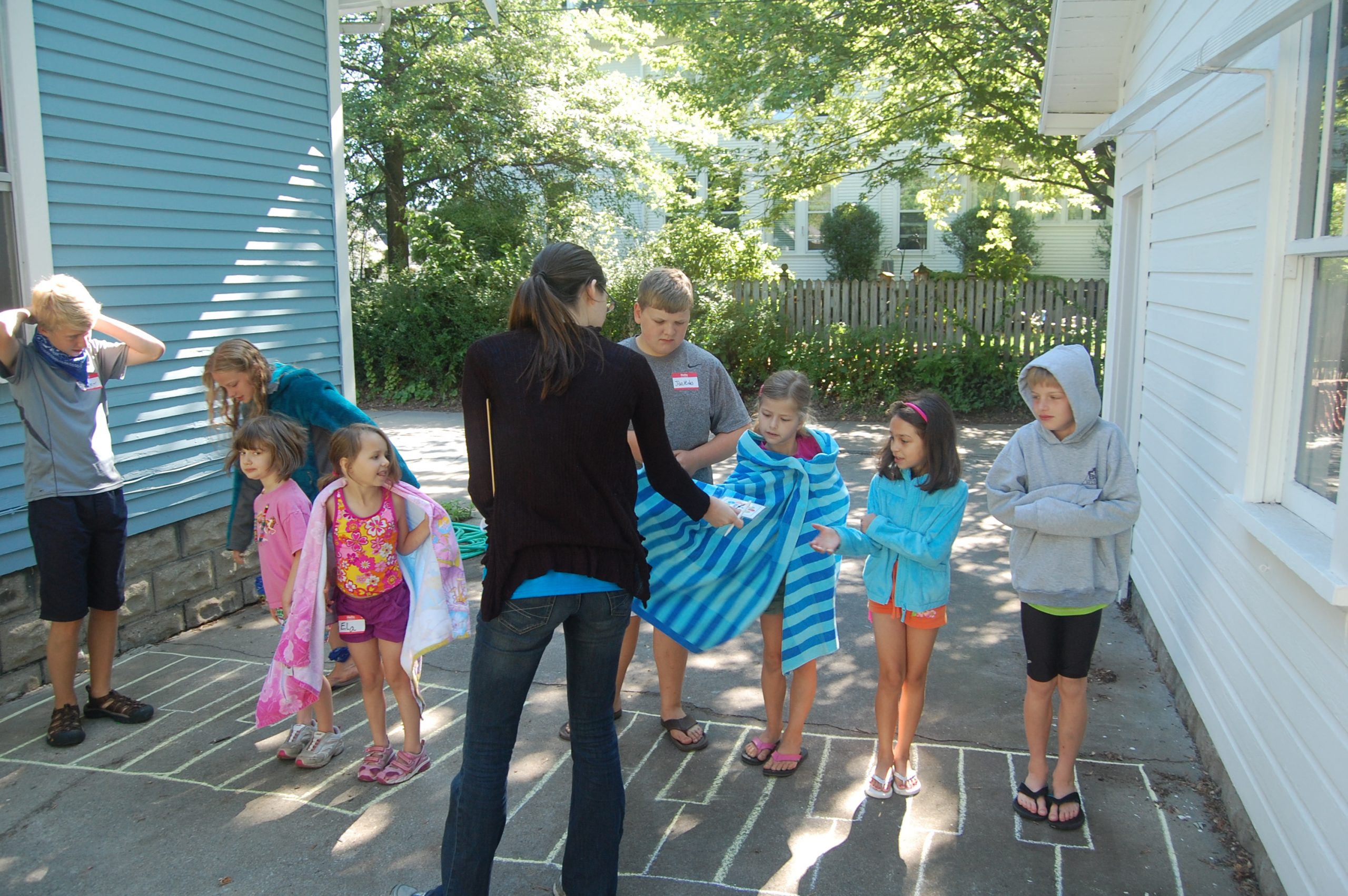 Here’s some photos to enjoy from Day 3 of my Musical Olympics camp: Our first game was the Build-A-Keyboard Interval Challenge.  To prepare, I drew a large keyboard on the cement for each team using chalk.  I gave each team two spinners: a musical alphabet one, and an interval spinner (unison through 5th).  Each of the four students on each team had a job: two students held the spinners, and the other two students stood on the starting note on the keyboard and the second note of the interval in order to build interval indicated on the spinner.  Teams raced to see how many intervals they could build within 5 minutes.  I didn’t get a very good photo of this game, because my husband and I were too busy tracking each team’s points (it’s a fast-moving game!).  🙂 Next was the Rhythm Memory Relay.  For this game, students lined up so that every-other student was a member of each team.  At the starting point, I held up a card with a two- or three-measure rhythm.  They were allowed to clap it twice, then they had to slalom through the cones to the other end of the yard, clap the rhythm to my husband by memory (they were given two tries), and then run back.  For the first round, I awarded a point for every rhythm successfully clapped by memory.  However, my students were better at this than I expected; so to make it more interesting, we then changed it so that students could earn up to 4 points.  They lost a point if they needed to clap it twice at the starting point, or if they needed to clap it twice at the ending point, or if they missed one of the cones as they slalomed.  🙂 Next was Musical Beach Volleyball.  Using a permanent marker, I wrote 6 different musical tasks onto the beach volleyball.  Examples: stomp 6 steady beats on the ground, recite the 7 letters of the musical alphabet backwards, and draw 4 half notes in the air.  Gameplay was much like normal volleyball (except I allowed teams to hit the ball as many times in a row as they wanted instead of limiting it to 3 hits), but when the volleyball touched the ground, the team to blame had to complete the musical task that was on top when the ball landed.  PLUS the other team got a point.  🙂  We used the clothesline as our net (which was just the right height for my students) and cones to mark the boundary lines. The Water Pinata Piano Relay was another fun water game!  This relay had quite a few steps: at the starting point, students picked up a bean bag, balanced it anywhere on their body (but no hands allowed) over to the chalk keyboards drawn on the cement, tossed the bean bag until they got it on the A key, ran over to the water pinatas (water balloons hung with string from the clothesline), hit the water pinata with an “A” written on it until it burst, and then ran back to tag the next player.  The next team member does the same thing, except for the letter B.  The first team to complete the relay (completing all the letters A-G) was the winner! This game is based on a game my family used to play outdoors at birthday parties when I was growing up.  My music adaptation is called the Water Rhythm Relay.  Each team is given four of the sponge balls pictured above (which I made following the directions of this website), a pail of water, and a set of cards with the various notes/rests pictured.  The first team member must grab the number of sponge balls in order to correlate with the number of beats the note/rest on the top card is worth.  They run across the yard to their team’s empty bucket, and squeeze out as much water they can from the sponges, run back, and tag the next player.  The teams are racing to see who can finish going through all their cards first, and also competing to see who will have the most water in their bucket at the end of the game.  I love how this musical modification turned out!