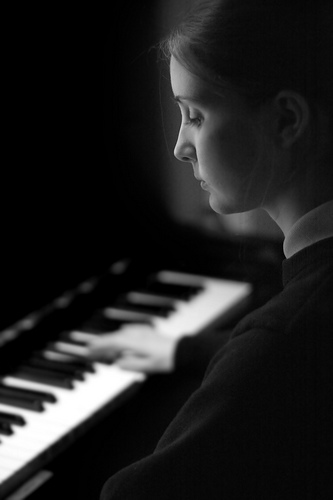 Last week was Spring Break from college for me!  My husband and I had a wonderful time visiting our families and spending time with them.  Our days were full doing all kinds of family activities — however, I did manage to keep an eye on my blog, especially the Forum Q&A about memorization that was posted last Tuesday.  Many of you left comments regarding whether or not you require memorized performances within your studio — but not many of you addressed my initial question about whether you consider the skill of memorization is essential to piano playing.  At first look, it appears to be essentially the same question…perhaps I could have phrased this a bit better?  In any case, today I’d like to delve in a little bit deeper into this question about the necessary or not so necessary skill of memorization.

To further clarify exactly what I’ve getting after here, a distinction must be made: There is a difference between memorizing and playing/performing by memory.  I will use these two terms distinctly in this blog post: memorizing refers to the process of memorizing a piece of music during practice with the intent of later playing by memory, while playing/performing by memory refers to actually playing the piece of music from beginning to end without consultation of the score.  This distinction is important because a teacher might, for example, consider memorization to be a necessary skill to develop in his/her students, but might be flexible in actually requiring students to play by memory during performances.

PERFORMING BY MEMORY: THE TWO CAMPS

There are many reasons to perform by memory.  Below are what some of them might be:

There are also various reasons NOT to perform by memory:

THE HISTORY OF MEMORIZED PERFORMANCES

First off, let’s start by considering concert pianists.  The majority of concert pianists today perform by memory.  It seems to be the general consensus for classical pianists.  Every now and then, however, I will stumble upon a YouTube video showing a famous pianist playing with the score (as this one of Richter, for example).  Usually, it is when the pianist is in his/her late career.  Perhaps because of their age they are fearful of memory slips.  Or perhaps they are too busy in their touring schedule to upkeep pieces by memory (it does require a lot of time to keep things memorized, after all) or to memorize new pieces.

Concert pianists did not always perform by memory.  Clara Schumann and Franz Liszt were the innovators who began the trend of performing by memory during the 19th century.  (Who was first, you ask?  It’s debatable: I’ve found credible sources crediting each of them.)  For the first time, the piano virtuoso / rockstar image was forming.  Before Clara and Liszt, it was actually considered disrespectful to the composer for a performer to play a composer’s work without the score during a performance.  A pianist’s own improvisations were often played by memory, however.

Knowing the above, one could make an argument that performing by memory is a novelty and completely unnecessary.  After all, there are many wonderful collaborative pianists who do not perform by memory (probably because of the time factor listed above), but give perfectly wonderful and very musical performances.  In addition, other instrumentalists (clarinet, trumpet, sometimes string players) perform with the score, and they usually have only a single-note line to learn.  Many people argue, why should solo pianists have to perform without music?  Why do competitions and music schools require memorization for performances?

We can look even further back in history, however, and also consider early music (I’m referring to the Renaissance and earlier) when music was not notated more often than not.  Before a system of notation was formed, music was an aural tradition, passed on by ear generation by generation.  There is no argument: music in any form is an aural art.  I think there is something pure and natural about both playing by ear and playing by memory.  Even non-musicians often consider it a weakness when a musician cannot play anything on the spot because they don’t have their sheet music and don’t have anything memorized.

THE VALUE OF MEMORIZING (VERSUS PLAYING BY MEMORY)

Playing by memory causes increased performance anxiety for many pianists.  However, even if playing by memory isn’t a requirement for an upcoming performance, it may still be worthwhile to take the time and effort to memorize the music.  Many pianists state that they generally play best when they basically have the music memorized, but are performing with the score.

Being able to play a piece by memory is a good indication that a piece has been “internalized”.  Of course, it is not foolproof, because musicians can certainly give groundbreaking, original musical performances even with the score in front of them.  But it hard to deny that memorizing a piece helps you know the music better.  Even when professional musicians perform with the score in front of them, I would argue that they often have sections of their music memorized.

The ability to memorize well does seem to indicate a well-rounded musician.  Sometimes teachers fear that if students learn to play by ear and memorize well, they will not learn to sightread well.  Ideally, a student should be able to read music well, be able to quickly translate it to the keys, and then quickly memorize it.  Memorization can be a huge help in getting a piece of music beyond the point of just being about to play the notes and on to the point where it is comfortable, enjoyable, and as musical as it can be.

Being able to memorize well is a different matter from being able to play well by memory in a performance setting.  Even if teachers choose not to require memorized performances during recitals, it may be worth consideration to require some playing by memory during lessons in order to develop this important skill and reinforce other vital skills.

Many composers and performers have remarkable musical memories.  Some people are able to play back a piece of music on the piano after hearing it only once or twice.  Not everyone is gifted with that kind of astounding internal ear and memory.  However, experts (musical or otherwise) always memorize as they learn.  While amateurs learn a piece of music first and then memorize it, experts memorize from day one and never differentiate between learning and memorizing.  To them, it’s one and the same process.

This should be the model for teaching students too.  Young beginner students frequently memorize their pieces automatically as they learn them over the course of the week (just like the experts!).  Memorization is difficult if you have not been doing it since you were young.  If this skill isn’t cultivated along with sightreading skills, the student will lose it.  If the student is encouraged to memorize from day one and is also asked to play by memory during the lesson, however, the student will develop his memorization skills along with his/her reading skills, and become more and more comfortable with playing by memory.

I do not consider myself to be an expert memorizer or performer by memory.  Because I was not required to memorize my pieces for recitals except when I was very young, when I reached college I found that I hadn’t the faintest idea how to go about memorizing my pieces.  Because it was so difficult for me, I found myself a member of the camp that questions the necessity of memorized performances for classical pianists.  I’ve since changed my views and landed somewhere in the middle — a result of my interest and extensive research in this topic for an essay during my senior year.

Once I became convinced of the value of memorization and playing by memory, I began working even harder at learning how to memorize.  (For some reason, teachers don’t seem to ever teach how to memorize! Why is that?!)  Over time, I’ve gradually been able to develop a kind of process to use to memorize my pieces (click here to view my post on memorizing piano music).  And although I still believe that I generally play better (i.e., more musically and generally more fluid) when I have the score in front of me, more and more I am experiencing the benefits of performing by memory and slowly getting better at it too.

Although I personally find great value in memorizing and performing by memory, I don’t strictly require both of these things with my students.  If an adult student struggles with playing by memory and I don’t believe it is within their goals to be skilled at doing so, I don’t push it.  Although I will certainly work on developing the skill of memorization with them privately in their lessons, I will not require performances by memory from them.

But in most cases, memorization and playing by memory are considered important skills to develop in my studio.  Being able to memorize is always the priority, and I make it a point to teach my students how to memorize.  Performing by memory is less of a priority, especially if the student experiences great performance anxiety as a direct result.  However, the goal is always to gradually get the student so comfortable with playing by memory during lessons that they eventually feel confident performing by memory for their school friends at opportune times, or for grandparents — and maybe even for recital settings too.

12 thoughts on “Thoughts on Memorization: A Skill Integral to Piano Playing?”

New on the blog: my review of Hazel Cobb's Techniq