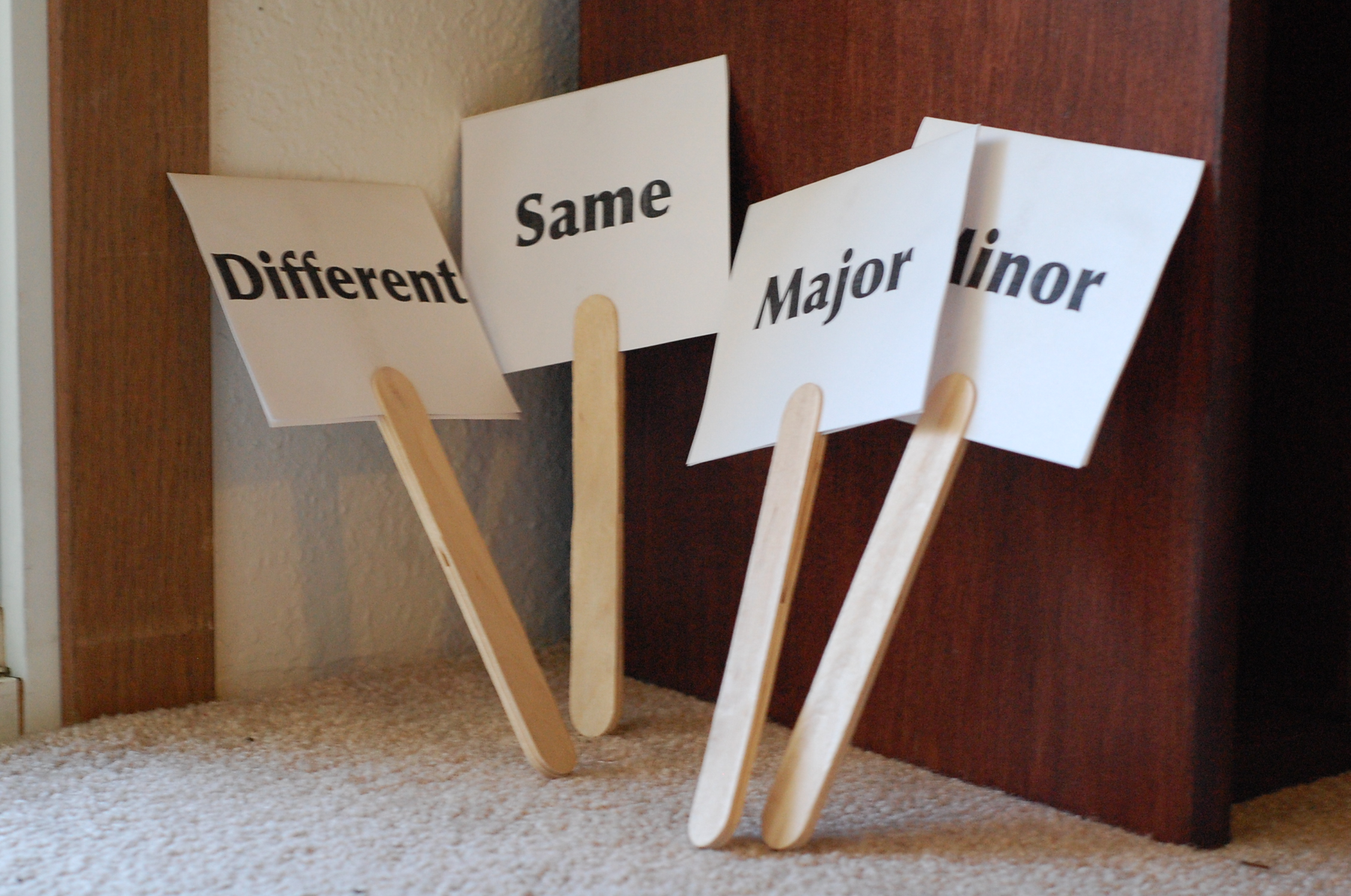 In continuation of a description of the music theory activities at our Piano Mini-Camp a few weeks ago, here are more details concerning the activities we used: This rhythm dictation game by Natalie was a real hit with the students!  I printed off two sets of cards and put the students into groups of two so that they could work together.  Here’s how the game works:

I tried to clap rhythms according to the approximate level of the groups of students I was teaching, and increased the difficulty of each rhythm as they became accustomed to the process.  I also tried to vary the time signatures between 2/4, 3/4, and 4/4.  I kept the rhythms to just 2 measures long, unless we were in 2/4 time or unless the students were more advanced.

I think it’s important to have the students be able to clap the rhythm back in its entirety before beginning to dictate it using the cards, because it helps increase their musical memory.  Otherwise, they will dictate only 1 or 2 beats at a time, and constantly be asking you to “do it again!”  If they can remember it themselves, they can then re-clap it to themselves as needed as they work on dictating it.

On the last of day of camp, the students had just made their own egg shakers during the opening fifteen minutes of camp – so I had them “shake” their rhythm instead of clapping.

In retrospect, I recommend removing all the rhythm value cards that the students won’t be using.  The beginner students were sometimes distracted and confused by the dotted quarter notes and single eighth notes (which they have not learned yet).  Simpler is better when it comes to beginners!

The students absolutely LOVED playing this game, and I think it was very valuable for them because it not only builds their inner musical ear/musical memory, but also builds their understanding of how rhythms and time signatures work.  (Thanks Natalie!)

With the older students on the last day of camp, I had them dictate rhythms on paper using Natalie’s Rhythm Dictation worksheet instead of using the cards from the game.  It was a great way to build upon what they had been doing the past two days. This game is one I created myself: a Listen & Sign game (for lack of a better title.  Ideas, anyone?).

This game was a welcome relief from the previous activities because it was much quieter!  The students tended to get excited and a little bit loud with the last game (which I didn’t mind very much because they were learning and having fun).  However, it was also really nice (for me) to have a quiet game too!

Each student was given a two-sided sign that read, “Same” and “Different.”  At the piano, I played two examples of a melody, rhythm, or succession of chords and the students were instructed to identify whether the two examples were the same or different.

This game was a great way to pull together the various activities we did over the three days and review them in a different format.   I played 5FPs and scales, varying them by making one major and one minor, in order to pull from / build on the gem notes on staff & keyboard activity we did earlier in the day.  And the rhythmic examples related to the rhythm dictation game we played.  I also varied the examples using forte versus piano, high versus low register, legato versus staccato, etc.  After holding up their signs to identify whether the examples were the same or different, I asked them to tell me how the examples were different.

I also created signs that read “Major” and “Minor” which we tried out after using the “Same” and “Different” ones.  Again, I played 5FPs and scales, but mostly I played little melodies/ditties.  The students loved it when I played the opening four notes of Beethoven’s Fifth.  =)

This game moves pretty quickly – I wouldn’t recommend doing it for more than 5-7 minutes otherwise you may lose the students attention.

Coming soon: a new printable and a short tutorial with pictures explaining how to create your own set of signs for the Listen & Sign game!

This arrived in the mail today — it’s a certif

I just updated this popular printable for the 2022

Finally getting around to sharing these! Thanks go

Baby Brenna is two weeks old! She sleeps a lot, so

Today’s the day! I received a package from #RCM