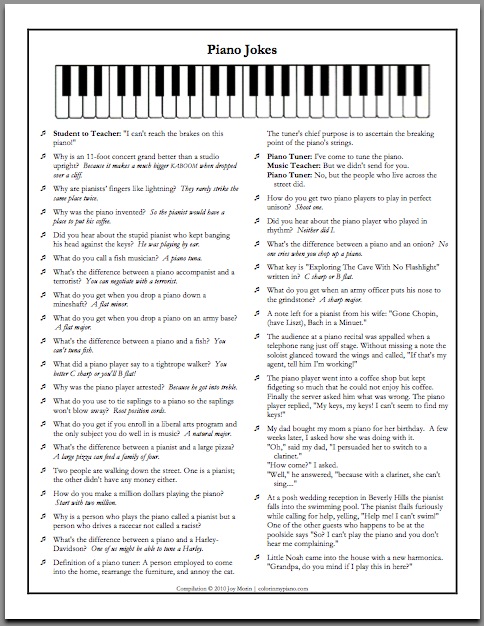 I’ve just compiled list of kid-friendly piano jokes…read on below to check them out!

This compilation of piano jokes is also available as a pdf to give out to your students/parents, available on the Printables > Other Resources page.

Why are pianists’ fingers like lightning?  They rarely strike the same place twice.

What do you call a cow that plays the piano? A moo-sician.

Where do pianists go on vacation? The Florida Keys.

What’s the difference between a piano and a fish?  You can’t tuna fish.

Why is an 11-foot concert grand better than a studio upright?  Because it makes a much bigger kaboom when dropped over a cliff.

How did the piano get out of jail? With its keys.

What did a piano player say to a tightrope walker?  You better C sharp or you’ll B flat!

Why did Mozart get rid of his chickens? Because they always ran around going “Bach! Bach!”

Did you hear about the pianist who kept banging his head against the keys?  He was playing by ear.

What do you call a fish musician?  A piano tuna.

What do you get when you drop a piano down a mineshaft?  A flat minor.

What do you get when you drop a piano on an army base?  A flat major.

Why are pianos so hard to open? The keys are inside.

Why was the piano player arrested?  Because he got into treble.

Why couldn’t the athlete listen to her music? Because she broke the record!

Why was the piano invented?  So the pianist would have a place to put his coffee.

What do you use to tie saplings to a piano so the saplings won’t blow away?  Root position cords.

What type of music are balloons scared of? Pop music!

Two people are walking down the street. One is a pianist; the other didn’t have any money either.

What makes music on your head? A head band!

How do you make a million dollars playing the piano?  Start with two million.

What part of the turkey is musical? The drumstick!

Why did the girl sit on the ladder to sing? She wanted to reach the high notes!

What is the musical part of a snake? The scales!

What makes pirates such good singers? They can hit the high Cs!

Student to Teacher: “I can’t reach the brakes on this piano!”

Piano Tuner: I’ve come to tune the piano.
Music Teacher: But we didn’t send for you.
Piano Tuner: No, but the people who live across the street did.

What do you get when an army officer puts his nose to the grindstone?  A sharp major.

A note left for a pianist from his wife: “Gone Chopin, (have Liszt), Bach in a Minuet.”

These jokes are so bad I can’t Handel them.

What do you call a laughing piano? A Yama-hahaha.

What raised the musician’s car insurance?

The piano player went into a coffee shop but kept fidgeting so much that he could not enjoy his coffee. Finally the server asked him what was wrong. The piano player replied, “My keys, my keys! I can’t seem to find my keys!”

The audience at a piano recital was appalled when a telephone rang just off stage. Without missing a note the soloist glanced toward the wings and called, “If that’s my agent, tell him I’m working!”

Little Noah came into the house with a new harmonica. “Grandpa, do you mind if I play this in here?”
“Of course not, Noah. I love music. In fact, when your grandma and I were young, music saved my life.”
“What happened?”
“Well, it was during the famous Johnstown flood. The dam broke and when the water hit our house it knocked it right off the foundation. Grandma got on the dining room table and floated out safely.”
“How about you?”
“Me? I accompanied her on the piano!”
“Haven’t I seen your face before?” a judge demanded, looking down at the defendant.
“You have, Your Honor,” the man answered hopefully. “I gave your son piano lessons last winter.”
“Ah, yes,” recalled the judge. “Twenty years!”

Smith needed to have her piano tuned so she asked a friend for a recommendation.  She then made an appointment with the piano tuner, Mr. Oppernockity. He arrived 2 days later, tuned the piano satisfactorily, and left.  Several days later Mrs. Smith noticed that the piano was terribly out of tune again.  She called the tuner to complain about the tuning and to ask for a return visit to solve the problem.  However, the tuner replied, “I’m sorry ma’am, but Oppernockity only tunes once!”

A pianist and singer are rehearsing “Autumn Leaves” for a concert and the pianist says: “OK. We will start in G minor and then on the third bar, modulate to B major and go into 5/4. When you get to the bridge, modulate back down to F# minor and alternate a 4/4 bar with a 7/4 bar. On the last A section go into double time and slowly modulate back to G minor.” The singer says: “Wow, I don’t think I can remember all of that.” The pianist says: “Well, that’s what you did last time.”

When Beethoven passed away, he was buried in a churchyard. A couple days later, a boy was walking through the cemetery and heard some strange noise coming from the area where Beethoven was buried. Terrified, the boy ran and got the priest to come and listen to it. The priest bent close to the grave and heard some faint, unrecognizable music coming from the grave. Frightened, the priest ran and got the town magistrate. When the magistrate arrived, he bent his ear to the grave, listened for a moment, and said, “Ah, yes, that’s Beethoven’s Ninth Symphony, being played backwards.” He listened a while longer, and said, “There’s the Eighth Symphony, and it’s backwards, too. Most puzzling.” So the magistrate kept listening; “There’s the Seventh… the Sixth… the Fifth…” Suddenly the realization of what was happening dawned on the magistrate; he stood up and announced to the crowd that had gathered in the cemetery, “My fellow citizens, there’s nothing to worry about. It’s just Beethoven decomposing.”

The following program notes are from an unidentified piano recital: Tonight’s page turner, Ruth Spelke, studied under Ivan Schmertnick at the Boris Nitsky School of Page Turning in Philadelphia. She has been turning pages here and abroad for many years for some of the world’s leading pianists. In 1988, Ms. Spelke won the Wilson Page Turning Scholarship, which sent her to Israel to study page turning from left to right. She is winner of the 1984 Rimsky Korsakov Flight of the Bumblebee Prestissimo Medal, having turned 47 pages in an unprecedented 32 seconds. She was also a 1983 silver medalist at the Klutz Musical Page Pickup Competition: contestants retrieve and rearrange a musical score dropped from a Yamaha. Ms. Spelke excelled in “grace, swiftness, and especially poise.” For techniques, Ms. Spelke performs both the finger-licking and the bent-page corner methods. She works from a standard left bench position, and is the originator of the dipped-elbow page snatch, a style used to avoid obscuring the pianist’s view of the music. She is page turner in residence in Fairfield Iowa, where she occupies the coveted Alfred Hitchcock Chair at the Fairfield Page Turning Institute. Ms. Spelke is married, and has a nice house on a lake.

Sources are from various internet sites, including: