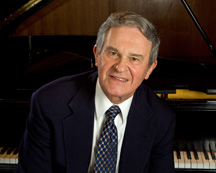 The next session was given by the fabulous Marvin Blickenstaff:

Performance Practice Made Easy: Rules of Thumb for the Piano Student

As teachers, we are always interested in fostering independence in our students — perhaps most importantly in the aspect of interpretation (making music musical and artistic). This is an elusive thing to teach.  It’s about getting beyond the notes.  It’s taking the dots on the page and transforming them into something that can change our lives.

Mr. Blickenstaff then told us about the Repertoire Classes he holds each week with his private students.  Students must announce their piece, the composer, and give some kind of explanation as to why the composer wrote the piece.  The students listening must take notes on what the performing student said, and also write down how the piece made them feel.   END_OF_DOCUMENT_TOKEN_TO_BE_REPLACED

What difference does it make how closely you follow the markings in the score?

Listen to these two recordings and see what you think!

This is a concert etude by Franz Liszt entitled, Waldesrauschen (meaning, Voices in the Woods).

The first version is played by Josef Hofmann and the second is by Claudio Arrau.

While both versions are obviously incredibly virtuosic and impressive performances, I personally prefer the second version over the first.  And not just because it’s a slower speed.  But it strikes me as more expressive.  There’s more rubato and Romanticism.  I think I can actually hear the “voices in the woods.”

I would also like to point out however, how you can truly hear the markings in the score in the second interpretation.  For example, the LH melody in the opening 15 seconds of the piece contains a couple of phrases that each contain a note with a tenuto.  Can you guess which note of each phrase has the tenuto, without consulting the score?

Another example, during one of the tumultuous middle sections, there are two crescendos marked in two consecutive measures (2:35 in the first YouTube video; 2:30 in the second).  Arrau truly takes the time to make these come out.

Occasionally, I will have a student who thinks they are doing the dynamics, but in actuality it all kind of sounds the same.  I mean, you can sort of tell they are doing them, but not really enough to notice.  And so I ask my students: “Do you think an audience member who has never seen the score would be able to tell you what the dynamic markings are, just based on what they are hearing? You have to really exaggerate the differences in order to make them noticeable.”

Anyway, I think it’s really fascinating to listen to various interpretations of the same piece – to get inspired to create my own personal interpretation!

Yesterday at a piano lesson, my student kept saying how she wasn’t sure “what to do in this section.” Although I wasn’t completely sure what she was feeling, I think she was saying that she sometimes wonders how she can make decisions about how to play a particular piece / passage musically. We were working on a Chopin Nocturne, and the main concept I was trying to communicate to her was to allow the RH melody to dictate some push and pull of the tempo, rather than allowing the LH accompaniment to metronomically determine the tempo. END_OF_DOCUMENT_TOKEN_TO_BE_REPLACED