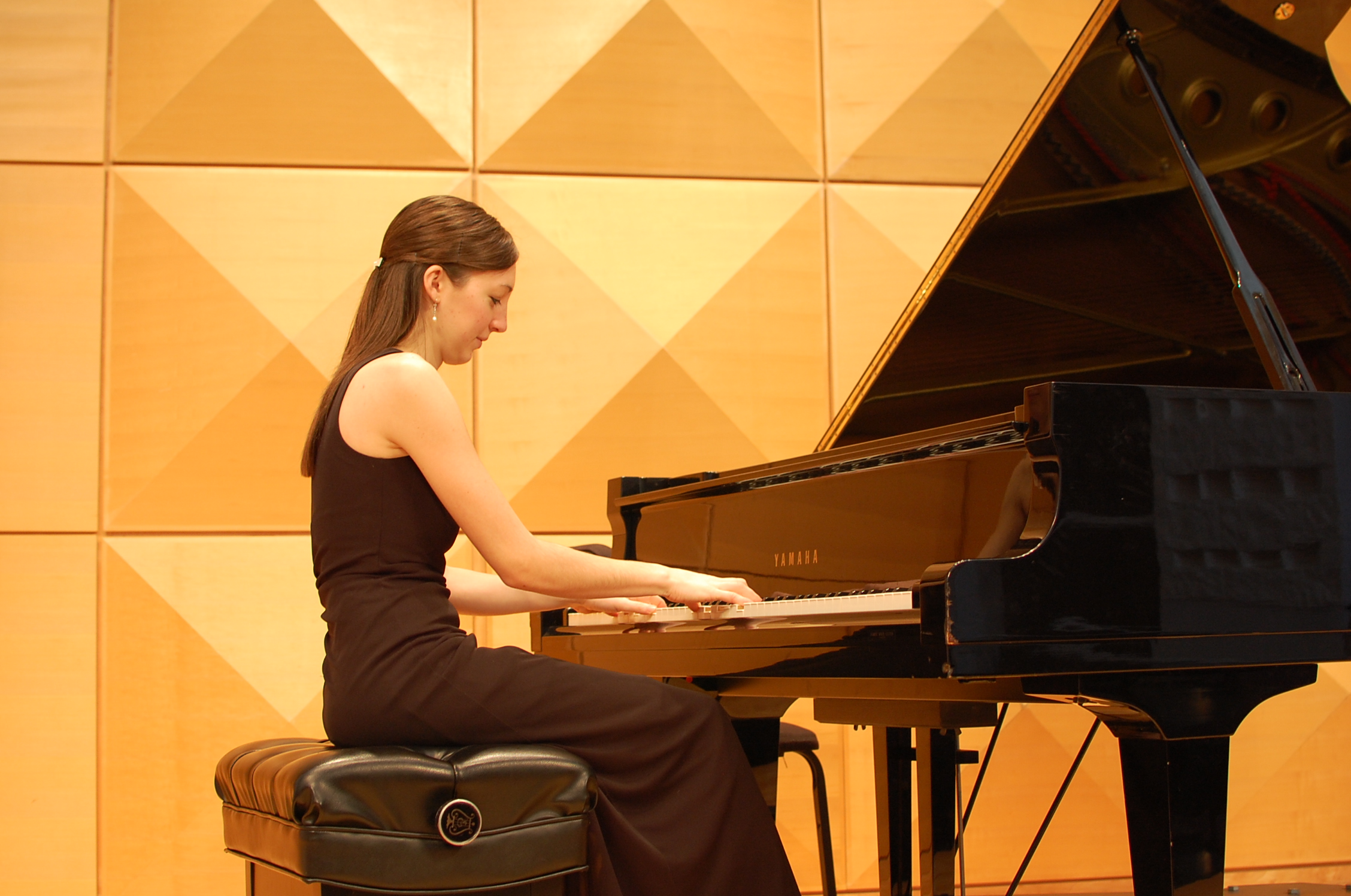 Well, my master’s recital has come and gone, and IT FEELS GREAT!  Compared to my undergraduate recitals, this recital was a much greater success.  I felt much more prepared and didn’t experience as much performance anxiety as I had expected to either.  I was actually able to enjoy myself throughout the process!  My family came up to see the recital, which meant a lot to me.  It was great to see them and spend some time with them after the recital.

Eventually, I will be getting a recording of the recital.  The school records it, and my dad also videotaped it.  When I get my hands on something, I will be sure to share it here if you’re interested. =)

Meanwhile, I have a photo (right) and some savory program notes (written by yours truly) for you to enjoy:

Rhythms from the North Country | Gwyneth Walker (b. 1947)

Haydn – Although most of Haydn’s keyboard sonatas were written for his students, this late sonata was written in 1794 for Ms. Theresa Jansen, a renowned London pianist who had studied with Clementi.  The technical challenges of this piece – rapid runs, parallel thirds, and more – attest to the impeccable technique of Ms. Jansen.  This sonata contains all the humor, surprise, and character shifts one would expect of Haydn, but it is unique in its tonal relations between the three movements: the second movement is in the key of E major – a shockingly distant key from the E-flat major key of the first and last movements.  The grandiose scale and character of this sonata has well earned it a place in pianist’s standard repertoire.

Walker – Gwyneth Walker is an American composer born in 1947.  A former faculty member at Oberlin University Conservatory, she resigned in 1982 in order to pursue a career as a full-time composer and currently resides on a dairy farm in Vermont.  Although Walker is mostly known for her vocal and choral works, she has also written a few gems for the piano such as this one.  The driving rhythms and extended techniques (including tapping on the piano and brushing the strings with one’s fingernails) contribute to the character of this piece in depicting the “North Country” where Walker currently resides.

Beach – American composer Amy Beach composed this piece, along with its pair The Hermit Thrush at Eve, in 1921 while at the Edward McDowell Colony, an artists and musicians retreat in New Hampshire.  Beach composed the two pieces based on the call of a hermit thrush, a North American bird with a brown back and a reddish tail.  Beach was able to transcribe the bird’s call on paper and then play it back to him in conversation.  Listen for the bird calls in the upper register of the piano occurring throughout the piece.

Prokofiev – The Visions Fugitives, translated “Fleeting Visions,” is a set of twenty short movements composed by Prokofiev between the years 1915 and 1917.  The colorful pieces, each lasting on average a minute in length (some as short as twenty-five seconds), allude to various moods and impressions that one may experience in a half-dream.  The set’s title is derived from a poem by Balmont: “In every fugitive vision I see worlds / Full of the changing play of rainbow hues.”

Bach – The French Suite No. 6 was composed around 1722.  The various movements of the dance suite each embody the character and style of a particular dance – although at this point in history, these pieces were no longer danced to and had become stand-alone pieces of music in their own right.  Five of the eight dance movements will be performed today.  The Allemande is a stately German dance in 4/4 time.  The Courante is a faster movement, usually characterized by rapid runs passed between the hands.  The slow and weighty Sarabande finds its origin in a sensual Spanish dance, while the Polanaise is a dance in 3/4 with Polish roots.  The set closes with a Gigue – a descendent of the British jig characterized by jaunty dotted rhythms.  Bach unifies the various movements into a set via tonal relations: all the movements are written in the key of E Major.

Liszt – Liszt wrote this etude, along with its pair Gnomenreigen, in 1862-63.  Waldesrauschen, as the piece is entitled, is sometimes translated “Whispers In The Woods,” or “Murmurs Of The Trees” – or more literally, “Forest Noises.”  The latter indulges the listener with much liberty of imagination in visualizing the forest and what it might hold within.  In this piece, one may catch a glimpse of various woodland creatures, swirls of magic, nymphs or elves, and perhaps something more menacing lurking  – but all prospering among the thick trees.

Happy Thanksgiving, from our family to yours!

No lessons this week for Thanksgiving Break! That

So happy with how our recent family photos turned

New FREE worksheet up on the blog: Identifying Led

Amazing artwork from one of my Keyboard Games clas

We all got dressed up yesterday for family picture

Today's blog post topic comes in answer to a quest

I like it when music puns come up in our calendar!