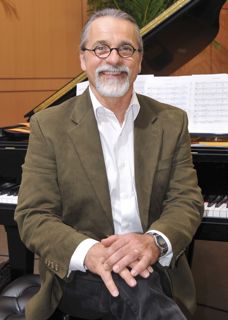 Improvising Is For Everyone, by Bradley Sowash

Last weekend, I attended the 2013 conference of the Ohio Music Teachers Association.  This year, it was held in Cincinnati at the University of Cincinnati College-Conservatory of Music.  I carpooled with three other teachers from my area.  We had a lot of fun!

The first session was held by Bradley Sowash, a jazz musician and piano teacher located in Columbus, OH.

For a number of years now, Mr. Sowash has been encouraging teachers to include creative skills (improvisation and composition) in their lessons.  For many years, teachers would respond to Mr. Sowash’s message saying they were certainly not interested in doing so.  However, things are changing: in recent years, teachers have begun agreeing with the premise that teaching off the page is just as important as teaching on the page.  Now, teachers are asking for information about HOW to do so.  Today’s presentation addresses this question about HOW to teach the skills for improvisation.

To begin, Mr. Sowash discussed 5 myths about improvising/playing by ear.  Many people believe that you must be born with a good ear in order to improvise or play by ear, but it simply isn’t true: it comes through practice and study just like traditional musical skills.

Next, Mr. Sowash described the process of teaching scales and chords to students in preparation for being able to improvise using them.  He called this section, “Scaling the Chords.”  The goal here is to teach scales more creatively, teach chord fluency, and understand pop/jazz chord symbols properly.

Mr. Sowash suggested that we be more aware of the meter when we teach our students to play.  When we ask our students to play scales, it often ends up sounding like 15/8 time.  🙂  Rather than play the scales with a string of equal beats, why not make sure students are playing in meter?  It is more useful because it teaches students to always keep time, just as they do when reading.

There are a variety of ways to solve this 15/8 problem.  Many band directors teachs scales with the tonic as a quarter note followed by eighth notes.  Mr. Sowash teachers what he calls “Squared Scales.”  Students play half notes in 4/4 time with the top note repeated.

Mr. Sowash varies the rhythm/meter of the scale as he increases the difficulty of the scale.  After mastering the half note scale, the student learn quarter note scales in two octaves with a half note at the top (again, the top note will be repeated to “square” out the rhythm).  Later, students learned eighth note scales over two octaves and triplets over two octaves.  Mr. Sowash also uses scales to teach tricky rhythms such a slow, quarter note triplets (three notes for every two beats).  This is a tough rhythm to master, but Mr. Sowash finds that if he makes students do it every week, the struggles and unevenness simply go away.

Mr. Sowash encouraged us to always accompany students as they are playing their scales during lessons.  This could involve playing diatonic harmonies on the piano in a fun rhythm, or it could be as simple as using a hand-held percussion instrument to make an interesting rhythm backing (tambourine, djembe, etc.).  This not only builds the student’s sense of beat, but also helps students get accustomed to playing with another musician.  Students can learn so much just by having the opportunity to play with an advanced musician.  (And it makes scale playing much more fun!)

Mr. Sowash then addressed the question: What is the best order to teach scales?  Many teachers follow the circle of fifths, learning the sharp key signatures first.  Other teachers use the “pendulum” approach, alternating between sharp keys and flat keys.  Mr. Sowash stated that both ways are “correct!”  Just be sure to have some kind of order/method for teaching students scales and key signatures.

Mr. Sowash made a very good point when he stated that teaching students to play cadence patterns is a useless skill if it is not accompanied with understanding.  It is a useless for students to be able to play the I-IV(6/4 inversion)-I-V(6/5inversion)-I cadence without understanding the chords they are playing. For this reason, Mr. Sowash suggested working with only root position chords until the students can understand the reason for inversions.

To understand chords, students must first understand scales.  When teaching chords, Mr. Sowash begins with what he calls “horizontal skipping.”  On a blank piece of paper, he writes the C scale on paper with the students: C D E F G A B C.  Then, students draw “swoops” on the paper connecting every-other letter.  This is a visual way to see the chord possibilities.  The horizontal writing helps students relate the letters to the piano keyboard.

Mr. Sowash suggested not addressing the pattern of half and whole steps in the scale yet.  To keep it simple, just think about skipping within a diatonic environment.

Next, Mr. Sowash repeats the drawing process with the letters written vertically.  This helps students relate the keyboard to the vertical appearance of the chords on the staff.

The next step is to bring the student’s attention to the sound of the chords (the ear should come before the eye).  As the teacher plays each of the possible diatonic chords, students can listen for happy/cheerful chords, dark/sad chords, and creepy (dimished) chords.  (As a side note, Mr. Sowash suggested delaying teaching augmented chords for quite some time since they do not occur diatonically in music.)

Next, add Roman numeral labels to the chords.  Here, students can begin to discover that ALL I, IV, and V chords are major (and therefore use capital letters).  Although we are in a major key, three of the chords are actually minor and one of them is diminished.  Interesting.

Once the student knows I, IV, and V, they can learn to play a variety of simple folk songs by ear.  They can also learn chord function using these rhyming phrases

The student’s first lead sheet should be played with all root position chords first.  Later, you can explain the usefulness of inversions.

Mr. Sowash next showed us how to apply the chords and scales to improvisation.  He begins with a exercises that gradually allow for more freedom in improvisation.

Students are instructed to repeat the C “squared scale” (as described earlier) in the RH as the LH accompanies with root position I, IV, and V chords (I    IV    I    V    I    IV     I-V   I).  As the student plays, the teacher keeps the beat and verbally instructs the chords in advanced to help the student think ahead.  Students can also do this along with an accompaniment track from a Clavinola or an app.

After a week or two, the student will be ready to add random direction to the RH scale.  Step three is to mix in longer note values.  Step four is to allow leaps of any interval.  Step five is to throw out the rules and just play.

Assign different keys each week.  Gradually, this simple excercise will become more and more musical and increase the student’s “repertoire” of chords and licks.

Minor scales should be introduced only after the majors are mastered.  They can be taught in the same way as the majors.  Begin with natural minor, to underscore the relationship of major keys to relative minor keys.

Mr. Sowash gave us some rules for understanding chord symbols and then quizzed us on our chord symbol knowledge.

This was a great session!  It is always valuable to hear about how other teachers introduce certain skills and theory concepts.  Mr. Sowash obviously has a great deal of experience in this area and his tips were invaluable!

Mr. Sowash blogs at the EyeEarRevolution.com and has a facebook page that can be found here.

12 thoughts on “2013 OhioMTA Conference (1) – Improvising Is For Everyone, by Bradley Sowash”