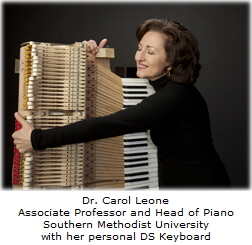 The next session of the OhioMTA conference that I attended was an absolutely fascinating session given by Dr. Carol Leone and David Steinbuhler, entitled: “Increasing Performance Potential: The Reduced Sized Piano Keyboard.”  I had heard of reduced sized keyboards before, but never really understood the reasoning behind it or the advantages.  I was so intrigued by what I learned!  Read on. Dr. Leone began by discussed hand sizes.  When you think about it, the piano is an instrument designed for those with large hands.  100% of children across the globe are playing pianos that don’t fit their hands.  (For violin, there are 1/2 and 3/4-sized instruments for children.  For piano, we are one-size-fits-all.)

The piano did not always have the same key size that is standard today.  The harpsichord has much smaller keys, as do many fortepianos.  They also had a much lighter action.

Injuries at the piano are at an all-time high, largely because of the demands of Romantic/Modern/Contemporary repertoire (large chords, octaves, etc.).  Pianists with small hands are limited in the repertoire they can play, and are injured much more frequently than those with medium or large hands.  Most of the pianists with small hands are probably women — their hand size is on average 15% smaller then male hands.  It is not an exaggeration to say that only about 10% of hands actually fit to the conventional keyboard.

The advantages of reduced-sized keyboards is clear.  Pianists with small hands often have to make adjustments or compensations when they learn repertoire.  Dr. Leone played the Chopin “Harp” Etude as an example, showing that she had to use rotation and staccato touch accompanied by pedal in order to play the piece.  On the 7/8 keyboard, she demonstrated that she was able to play the piece legato as it was intended, with far less effort and stress on her hands.

Dr. Leone next discussed the adjustment period when going to and from the conventional keyboard to a reduced-sized keyboard.  Based on her research and experience with these instruments, most pianists adjust in less than an hour.  It is not difficult to go back and forth between the different size keyboards — after all, organists and harpsichordists do it all the time.  Her students with small hands learn their repertoire on the 7/8 keyboards in order to prevent injury and learn the most natural way to play the piece.  Then, they are often able to play the piece on a conventional keyboard without the tension/pain that would have resulted if they had gone through the learning stages of the piece on the conventional keyboard.

Pianists with small hands experience more accuracy, more security, and less strain/fatigue on a keyboard that fits their hands.  They can eliminate unnecessary movements, contrived pedaling, learn a more natural way to play, and devote more time to the music versus the technical aspect of playing.

Mr. Steinbuhler is not a musician by trade, but rather the owner of a family textile business in Pennsylvania.  In 1991, he happened to stay at a Bed & Breakfast where the owner had a 7/8 sized keyboard on his concert grand.  The owner told Mr. Steinbuhler that he had the piano specially built in the late 1970’s when he realized that his small hands where limiting what repertoire he could play.  Mr. Steinbuhler was so inspired to hear the B&B owner’s story about how wonderful it was to have a piano that fit his hands.  So, he decided he would begin building reduced-sized keyboards.  After some years of learning and tinkering, he successfully made his mother’s Steinway studio piano into a 7/8 keyboard.  It was history from there!

It seems to me that reduced-sized keyboards are both revolutionary and long overdue!  I had the opportunity to try out the reduced-sized keyboards in the exhibit room after the session, and it was SO fun to be able to play parallel tenths and various larges chords on the piano for the first time!!  I have medium hands — I can reach a 9th on the conventional keyboard, but not comfortably.  I hope the word about these keyboards continues to spread and they become more common!

I found some videos by Dr. Mario Ajero from the 2007 National Conference on Keyboard Pedagogy that show more about these keyboards.  If you are interested in learning more, definitely check out Part 1 and Part 2.  And be sure to check out Mr. Steinbuhler’s website too.